SAFRA wins a tender for the supply of 6 hydrogen buses

The bus manufacturer SAFRA has just won a tender launched at the end of 2017 by the Syndicat Mixte des Transports Artois-Gohelle, for the supply of 6 hydrogen buses. The choice of the SMTAG was made on the Businova, bus with an attractive design and perfectly responding to the new directives of the Energy Transition Law. This market offers great prospects for the Albigense company, which is part of its growth already well underway thanks to this project. The hydrogen version of the Businova will be equipped with a fuel cell manufactured by Michelin. 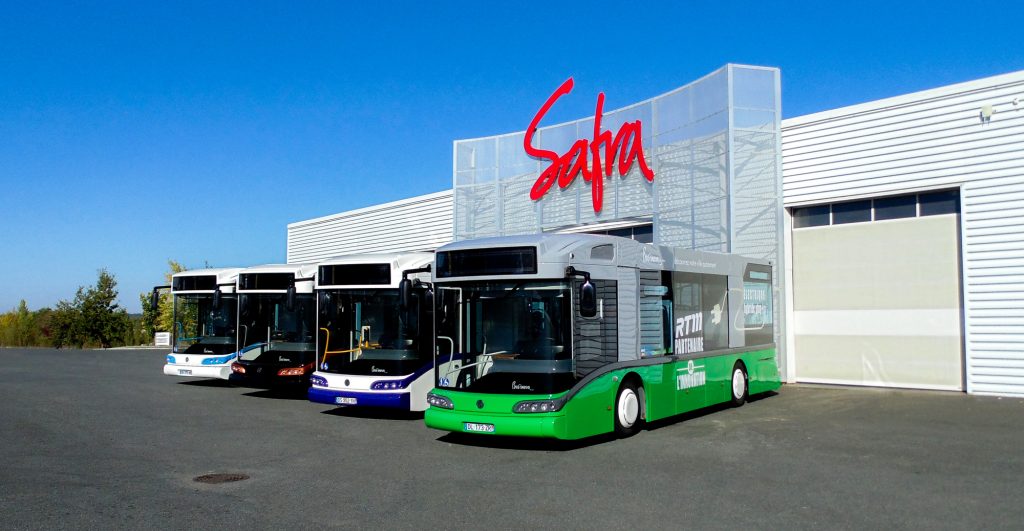 The market won by SAFRA comes from a public tender launched by the Syndicat Mixte des Transport Artois-Gohelle for the supply of 6 standard low-floor buses with fuel cell electric motors. The scope of the SMTAG encompasses 150 municipalities including the agglomerations of Lens – Liévin, Hénin – Carvin and Béthune – Bruay – Artois-Lys-Romane, making it the 6th transport perimeter in France. This success confirms SAFRA’s decision to develop its range towards zero emissions, including the hydrogen version. By launching into the hydrogen range, SAFRA becomes the first French manufacturer of hydrogen buses.
From its genesis, the Businova was designed to adapt to technological developments, its architecture allowing the vehicle to evolve to different modes of motorization. This is what has strongly mobilized the teams of the Businova program in recent months, to develop a complete range with different sizes (9.5m, 10.5m and 12m) and several engines. Indeed, thanks to its architecture composed of a passenger chassis and its energy pack, as well as the configuration of the side boxes, the Businova has the ability to integrate different types of engine, from pure electric to H2 fuel cell, without major technical constraints.
The Businova is thus marketed in very low emission mode with its «plug-in hybrid electric» range offered with a Diesel extender (Euro VI) or NGV, which perfectly meets the requirements of Group 1 of the Energy Transition Law Decree for Green Growth. It is also available in zero emission version, in 100% electric with a slow charging system in the evening at the depot, or fast by reverse pantograph, but also in hydrogen version. It is on these aspects of operational agility and vehicle scalability that the Businova keeps a real step ahead of its competitors.

From the beginning of the Businova project, the SAFRA company was very interested in hydrogen technology, which allows to maintain a reduced battery capacity by providing additional energy. The Businova H2 is the result of the original architecture developed by SAFRA since 2011 and certified. Retaining all the vehicle’s architecture (passenger compartment, chassis, deck, mechanical components, batteries, electrical architecture) SAFRA has adapted a hydrogen system on the initial 250 kW electric traction line, powered by a lithium-battery pack.132 kWh ion. The fuel cell is supplied by Michelin, and the system incorporates a storage of 28 kg of hydrogen at 350 bars, which allows to cover a range of more than 300 kms per day. The Michelin hydrogen module is built around a 30 kW fuel cell. Michelin battery technology can cover a range of applications from 5 to 100 kW. Important integration work was carried out to obtain a reduced weight and a very compact volume, in order to facilitate the integration into the vehicle.

The new range offered today by SAFRA perfectly meets the needs of the French market in zero-emission vehicles following the latest directives of the energy transition law, but also at the international level, with European projects related to carbon-free mobility solutions.